Documentary / runtime 1 h, 35min / User ratings 7,6 of 10 Star / Brief Focused on the life of the band and their collaborators over the 3 vital years in which they developed critically acclaimed albums, 'Humanz' and 'The Now Now', and undertook their most ambitious world tour to date /

Noddle : Cool shoe shine 2-D : The world is spinnin too fast Murdoc : eugghhh? Russel : nothing Hotel. Trivago. Gorillaz: reject false icons full movie hd. 2:13 ace is T H I C C. Can't wait to get this app while in T H E B A T H 🛀🏿. Omg Im so scared rn I was watching a Gorillaz meme compilation and saw a meme of this just go to 0:40 and look at the top left hand corner WTF WHY IS THAT THERE.

How do you feel about Humanz. Reject False Icons from the Rock It video. Reject False Icons was a Gorillaz marketing campaign to advertise their new video for the song, Rockit. Fans could download a file with the words "Reject False Icons" in white with a black background. The idea was for them to download it and print it off on sticky back paper and stick it onto false icons, for example, fashion magazines and pictures of models. The full line is "Respect False Icons, Reject False Icons". According to Noodle, "Reject False Icons means many things, one of them is to think for yourself". The phrase is meant to say that people should appreciate things like music and other media, but not idolize them. Also, they should pick what they like, not what the media likes. Ironically, the second half of the phrase is used by many people to shoot down what other appreciate (like other music artists) and idolize their own bands. Trivia The name of this campaign was one of the original names of Gorillaz's second album before the name was confirmed to be Demon Days.

Person: So what bands do you like? Me: Gorillaz. Person: What genre are they? Me: T H E B A T H. Here is Gorillaz’ brand new feature documentary film titled GORILLAZ: REJECT FALSE ICONS, directed by Denholm Hewlett, will premiere in cinemas for one night only on 16 December, being shown in 27 countries and 600+ cinemas around the world. PREMIERES IN CINEMAS WORLDWIDE ON DECEMBER 16, 2019 In his debut feature, director Denholm Hewlett followed the band’s every move for three years, covering the making of two critically acclaimed albums, ‘Humanz’ and ‘The Now Now’, as well as the band’s most ambitious world tour to date encompassing dates across Europe, North America, South America and Mexico, bookended by its own Demon Dayz Festivals in the UK and US. The result is the first ever all-access immersive journey into the world of Gorillaz and its extended family – featuring never-seen footage, where the virtual meets the real – to capture the wondrous chaos of life under the watchful eye of Murdoc Niccals (bass), Noodle (guitar), Russel Hobbs (drums) and 2D (vocals).

Gorillaz: reject false icons full movie 1. I was underwhelmed. I could hardly hear what people were saying, I guess Grace Jones could not make an appearance (bummer, not really, but that would have helped justify the 17 ticket) and the after credit footage was not memorable.
To reiterate on the audio issue, the music was not loud enough! Feel Good Inc. sounds great at any volume, but I really wanted to be blown away. 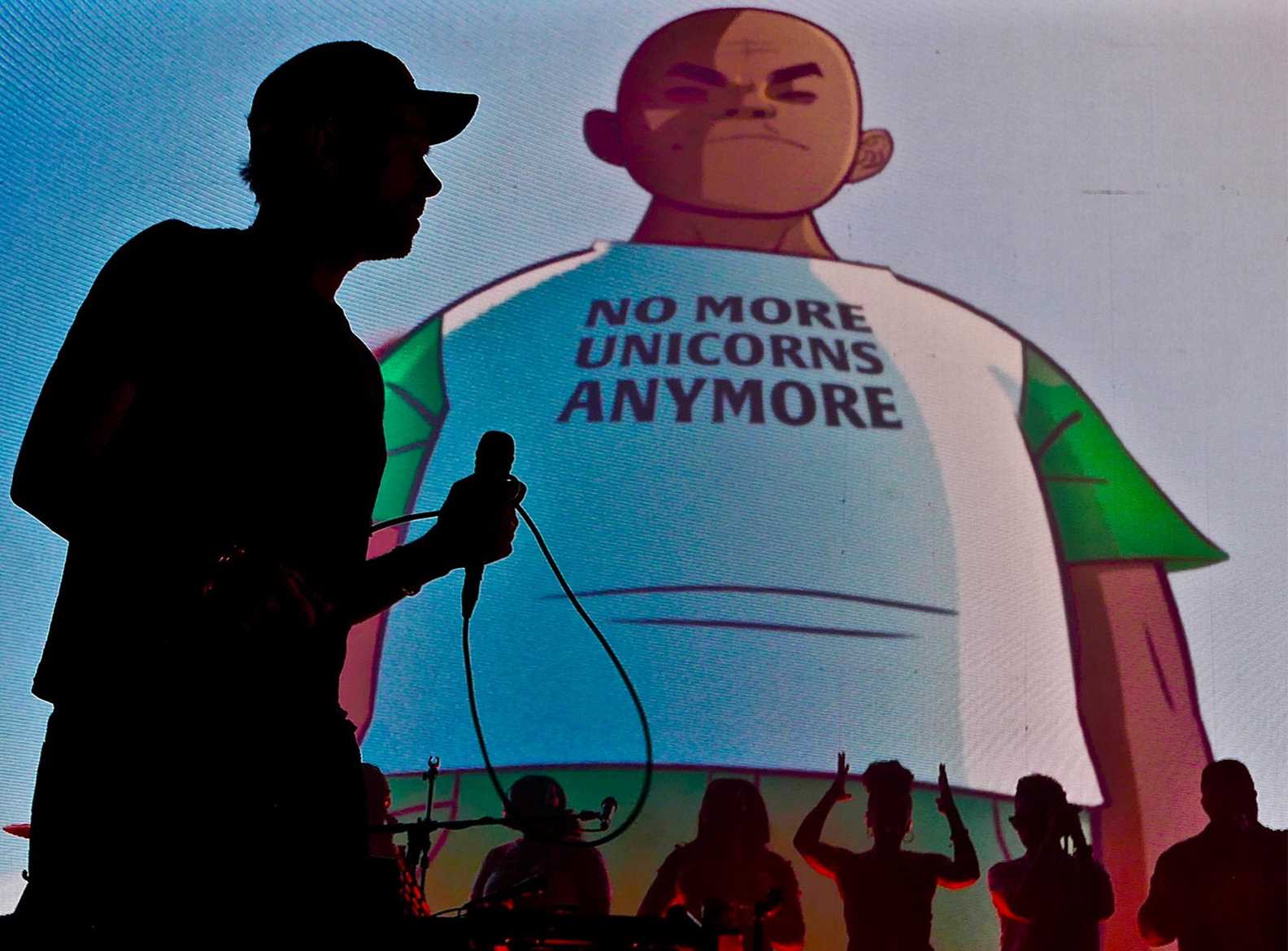 Yesssss the livestream. 😂 end result is great. Thank you for this video, I really enjoyed your take on everything. Keep doing what you do man (Gorillaz or not.

Being a long time Gorillaz fan and loving the Bananaz documentary I was really looking forward to seeing this film.
This documentary captures the recording and tours of Humanz and The Now Now.
I would have liked to have seen more behind the scenes studio content and less concert footage. Also found it frustrating only hearing 20 second snippets of their songs.
Highlights of the film include the version of Busted and Blue with Kelela and Albarn's performance of Cloud of Unknowing. I honestly don't agree with you on 'We got the power. I feel that the true meaning is about having to stick with each other. We're a country and we should all accept our differences. Hence the lyrics We got the power to be loving each other no matter what happens. Who knows, I could be wrong. But the lyrics are just screaming it. We as a society have to deal with whatever happens and just love each other.

“Humanz after all” Nice Daft Punk reference. As a longtime fan of Gorillaz and Damon's past work, I was expecting something extravagant from this, however it just felt like an extended tour video. the irony in a title like "reject false icons" and the subsequent applause was mind-boggling. don't get me wrong, I loved hearing some classic Gorillaz (M1-A1, Latin Simone, and O Green World especially) but I know anyone who wasn't a mega fan wouldve been quite bored- this includes my stepdad who sadly was roped into this theatre.
3.5/10 rounded to a 4 for benefit of the doubt. Gorillaz: Reject False Icons Full movie page imdb. A first look at the cartoon band's new feature length excursion. Gorillaz fans have been waiting years for an animated movie based around the antics of the world's longest-running cartoon band; it's been long mooted since the 2000s, with Terry Gilliam's name coming up at one point. Maybe a few were expecting something like that when announced that Reject False Icons would be screening for one night only in select cinemas, giving the whole thing an air of mystique. Reject, as we'll stick to calling it, is not that film. Even calling it a standard music doc somewhat falls short as a description, not because the movie's some sort of mixed-media hybrid - how cool would that have been? - but because most documentaries have an essential narrative underpinning them, or private moments where you really get to know the humanz being presented to you on camera. Reject has none of that, unless you count it as the basic story of Band goes on tour, Finishes tour, The End. That's what you get here, and if you expect nothing more, then Reject False Icons should be a pleasing experience for most Gorillaz fans. You get blasts of the live show, some studio jamming, a bit of banter here and there. What you don't see much of is 2-D, Murdoc, Noodle, Russel and temporary Gorilla/Powerpuff Girl alumni Ace; in other words, the Gorillaz themselves. That shouldn't come as a surprise to anyone who's followed the project's trajectory from its cartoon inception in 2000 to the Damon Albarn side-project that the band essentially is today. Reject basically cements the Gorillaz as it stands in the 2020s, with no behind-the-scenes peeks of their music videos, no focus on the stage visuals behind Albarn and company, and barely any moments with the artist behind it all, Jamie Hewlett (even though his son, Denholm, is the one shooting everything we see. ) The band's one other feature length excursion from 2008, Ceri Levy's Bananaz, did a much better job at showing the unit as a duo, being half about the music, and half about the art. It also did a good job in showing dialogue and situations from start to finish, something Reject just doesn't seem interested in doing. Conversations are either joined midway, or mixed with dodgy audio. A parade of guest singers are presented to us, sterling talent like Kelela and Lil Simz, but who have little to say or - more accurately - no chance to say it. None of these alternative stars really comment on what the band means to them, nor how they crossed paths, or where the inspiration for lyrics and performances may have come from. We don't get a feel for what's changed since Bananaz was released, or what the band stands for any more. We don't even get to know what's next for the group. The most silent figure in all this is Jamie Hewlett himself. The Gorillaz character designer and visual guru doesn't really get a look in until almost 80 minutes in; when he does appear on screen, he does some cool sketches, talks a bit about the eraser on the end of his pencil - and that's it. Imagine if we'd instead heard him talk about adapting his art as tech evolved in the 2010s, how he feels about his position in the act, what he thinks about the act's music and talent involved. We see him doodle among overheard mentions of what the characters are up to now - Murdoc in jail, Ace joining the band - but with little idea who's behind these ideas, or what fun these narratives open up to the creators. Damn, there could have been a whole segment based around why they decided to add a freakin' Powerpuff Girl character to the group, and the logistics in making that a reality. Should you reject Reject False Icons, then? If you love all things animation, character design and pop culture, then yes. If you're into noodly keyboard jams, snippets of stage shows and Damon Albarn's contented face, then no. Gorilalz: Reject False Icons premieres for one night only this December 16th, 2019. Book tickets here. Read next: Artists celebrate 20 years of The Powerpuff Girls Note: We may earn a commission when you buy through links on our site, at no extra cost to you. This doesn't affect our editorial independence. Learn more.